In early 2021 the School of East Asian Studies ran a creative writing competiton for students in years 10, 11 and 12 in the UK. We asked entrants to write an essay that addressed the following question ‘How has East Asia influenced life in the UK?’.

Winning entry
How has East Asia influenced life in the UK? – Japan
Written by Maddie Whiteley 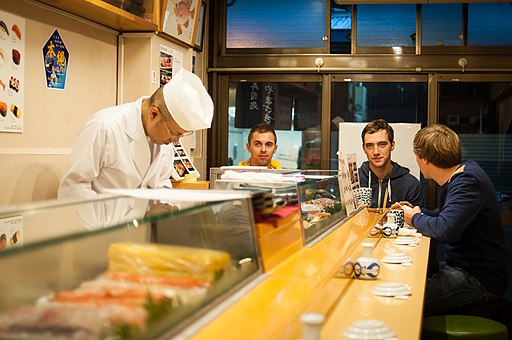 Whether it is bingeing the latest season of Terrace House, taking Karate classes, buying Kenzo shoes or reading Haruki Murakami’s latest book Japanese culture is all around us. Whether consciously or not, this profoundly affects our perception of Japan, and in a wider context our general cultural tolerance. Our appreciation of Japanese culture in particular is perhaps a reflection of the historic commonalities between Japan and the UK that have allowed greater understanding of one another.

The influence of inherent connections between the UK and Japan are essential to the relationship between the two. Historically, the two nations have been intrinsically linked through their imperial history. Whilst not an admirable connection, their vast empires were a distinguishing factor between them and their neighbouring countries. Japan was the dominant East Asian power; during the Second World War they occupied Korea, Taiwan, the Philippines and large parts of China (Wikipedia, 2021), to name just a few. Similarly, Britain has infamously invaded all but 22 of the 195 nations in the world (McCarthy, 2018). The fact that two island states were able to command such global power is because of their similar geography. Their “Small Island Status” (Anon., 2013) forced a more open and outward culture, which in turn spawned these expansionist policies. A lack of natural resources forced both to trade internationally and built imperial empires which historically defined both nations. So much so that, in 1613, when Will Adams’ ship became the first British ship to dock in Japan, it was to set up trade between Japan and the East India Company (Best, 2019). Many from Will Adams’ ship were deeply distrusting of the Japanese, and condemned Adams’ fraternity with the locals (who had made him an honorary samurai). This event illustrates the British intolerance towards unfamiliar, “exotic” people and nations that still exists today. Moreover, both states currently have a constitutional monarchical political system. Whilst Britain’s may be older (having been first introduced in 1215 with King John’s introduction of the Magna Carta and later in 1688 after the English revolution), both systems resemble each other today. Japan’s constitution was adopted in 1947, with the goal that installing the emperor as a figurehead (differing from the UK in that they do not have a nominal role in government) that could unite the people, advocate for the nation’s values and retain stability, the key inspiration for which would have been the British system, which at the time seemed to be the key to century-long internal stability. Indeed, evidence of its positive effect should be cited in Emperor Akihito’s subsequent peace advocacy between 1989 and 2019, where he tried to bring the Imperial family closer to the people and heal relations with previous colonies (Dickinson, 2019). Furthermore, much like many European nations, Japan underwent a political revolution in the 19th century that resulted in the Meiji Restoration of 1868. While it was 20 years later than the famed “Springtime of the People” (1848), it nonetheless demonstrates the similar political patterns shared by Europe and Japan. While Britain did not undergo a revolution at the time (a testament to the stability of a constitutional monarchy), political changes can be seen through increased social reforms and the development of English (as opposed to British) nationalism. These connections, primarily historic, reveal that unlike the misinformed perception of William Adams’ crew, Japan is not “exotic” or “alien” but is different with some commonality. An understanding of the similarities between the UK and Japan is influential in prompting a better understanding of the differences.

The influence of Japanese culture on the UK today affects British perceptions of Japan. The globalisation of Japanese culture began in the 1980s, following their economic boom, and has continued through to today. An example of this can be seen in a recent TikTok trend of “Little Moons”, an ice cream filled mochi (a Japanese dessert) that has seen a 700% increase in sales (Young, 2021). Whilst seemingly inconsequential, this is illustrative of the ongoing fascination with and prominence of Japanese culture in the UK. In other aspects of culture, Japanese video games such as Pac-Man and Super Mario have become familiar favourites, the anime film Spirited Away was ranked 28th on IMDB’s “highest rated movies of all time” list (Anon., n.d.) and the UK chilled sushi market was worth an estimated £68 million in 2017 (Vadukul, 2015). Economically, since after World War Two, Japan has been a key influencer in the UK. The closure of a Japanese-owned Honda factory in Swindon has been set for July this year, prompting job losses for 3500 workers (Anon., 2020). This regional unemployment created will have a substantial negative effect on the local economy. Countering this, in October last year Japan appeared as the UK’s knight in shining armour, offering the UK their first major trade deal as an independent state post-Brexit (Harding, 2020). Japan’s continued injections into our economy through trade deals and bringing business to the UK have had a major positive impact and will continue to do so.  Had a pandemic not been raging, last summer Japan would have hosted the Olympic Games in Tokyo, making it an international hub for sporting prowess, global tourism and foreign fascination that year. The influence of Japanese culture worldwide reveals how in the past century it has shifted to become a key nation in global affairs both through its economic intervention and the promotion of its rich culture, an effect that is felt today in the UK.

One might ask: what influence does the growing importance of Japan have on the UK and why this is important? I think that the answer is simply that it encourages appreciation and acceptance of Japan as a nation. To put this in a wider context, the historic British perception of the Japanese, or indeed anyone of Asian descent should be considered. They were viewed as “exotic” in the sense of being alien and outsiders. This dismissive view of cultures that differs from their own fails to comprehend both the similarities between Japan and the UK and the richness of the Japanese culture. While an imperial history is hardly something to be proud of, it is revealing of a very important point; good or bad there are significant similarities between our two nations and therefore it would be ignorant to write one off as separate or below the other merely because of the distance between the two or their differing races. However, this bigoted view of Asian nations and people is still ever prevalent today. At the time of writing, there is still ongoing hate towards individuals of Asian origin, the latest example of which being a deadly shooting of 8 people, 6 of which were Asian women, in Atlanta on March 16th that sparked rallies across 60 US cities in one weekend (Hauser, 2021). The UN released a report last year that described “an alarming level” of racially motivated violence against Asian Americans (Nations, 2020). In the UK, anti-Asian hate crimes rose by an estimated 300% in the first quarter of 2020 (Data, 2020) because of widespread scapegoating of Asians for the spread of the coronavirus. These issues mark striking divides in our societies and an unacceptable level of intolerance. As previously stated, the spread of Japanese culture and commonalities between the UK and Japan are pivotal in the appreciation and acceptance of Japan and therefore in dismantling misunderstanding and misrepresentation of Japan.

Whilst comparing British and Japanese cultures does not solve the issue of racial intolerance, it is an important factor in reinforcing the fact that individuals of Asian descent are important and valid members of our society, something that seems to have been forgotten in light of recent attacks. The Japanese saying: “十人十色” (10 men, 10 colours) (Scola, 2019) reminds us that people have different tastes and preferences and that this is natural and to be expected. Similarities in geography, politics and history are useful for creating connections between nations but at the same time, it is unique characteristics that define cultures. The positive effects of Japanese influence on the UK both culturally and economically remind us that international cooperation is essential. At times where nations are focusing inwards, Japanese influence in the UK encourages us to look outwards; to see all ten men equally in all ten colours.